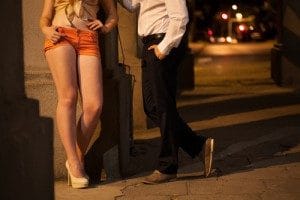 If you find yourself charged with prostitution and/or solicitation charges in South Carolina, you are probably well-aware of how complicated an issue it is legally. You may have been giving a woman a ride, only to find out after you have handcuffs slapped on you, that she’s a prostitute. We can help examine the legal questions and offer an entrapment defense, if applicable.

Entrapment means that you, the defendant, weren’t likely to actually prostitute yourself or solicit sex from a sex worker, but the manner that an undercover officer expressly requested or offered engaged you in the act.

When an officer of the law arrests a person for loitering or soliciting sexual services with the end goal being engaging in prostitution (having sex or performing sexual acts in exchange for money), the law enforcement officer looks at many telltale signs to prove that the person under arrest was intending to break the law and commit a criminal act. These factors include:

If you’ve been arrested and charged with solicitation or prostitution, the charges are usually misdemeanors. If you have prior convictions however, you may be looking at a felony charge. Because these crimes and charges are so delicate, it requires a knowledgeable and experienced attorney to provide you with the most favorable outcome. Your personal life and your future are at stake–you don’t want your name to be damaged, your reputation to sour, and your person to be tied to “sex scandal.” If you’ve been arrested and charged with soliciting prostitution, please call a criminal defense attorney at Strom Law Firm today! We can give you a free consultation and figure out the right way to proceed.

The crime of Carjacking is defined as:

Motor vehicle theft–in its various forms–is a fairly common crime. There are different ways of thieving a vehicle including seizing an opportunity (the owner accidentally left the keys in the ignition while they ran inside to grab something they forgot). Other ways involve more nefarious acts by the thief including B and E (breaking and entering) or carjacking.

Carjacking is an extremely serious charge that requires your criminal defense attorney to be extremely familiar with prosecutorial techniques, the law of South Carolina, and the deep desire to protect your future and your freedom. We will ensure that you have an extremely well-planned defense to help you to the most favorable outcome. Let us fight to protect your future and your interests.

Getting Arrested Does Not Mean You Are Guilty

Just because you were arrested or are under investigation for a crime doesn’t mean you’re guilty or that you don’t have any rights. You need an experienced criminal defense attorney who will go to battle for you against your charges. Please call or contact us today for a free, no cost evaluation of your case.

In today’s world, charges of hazing are often brought against a fraternity or sorority willy-nilly. While we don’t condone hazing—and its effects can be reprehensible, it doesn’t mean you don’t deserve a defense or a future because one person’s actions can be held against you—even if you didn’t outright play a part in them. In fact, an accusation of hazing can lead to criminal charges as well as disciplinary actions from the college, and you may be seen as guilty (even if you’re not) in light of many of the hazing-related deaths that have happened around America.

Where Is Hazing Found?

Moreover, hazing isn’t simply restricted to Greek Life, though it seems to be a commonly-held perception. Hazing cases have also been found in the military, sports teams, the marching band, cults of the religious type, and a myriad of other organizations or teams. In college, 3 of 5 students said they’ve been hazed. And 47% of students say they experienced hazing before they even entered college. This should show that Greek Life is disproportionately affected by hazing allegations—and you deserve a strong defense.

But I Didn’t Participate Directly!

If your fraternity/sorority is accused of hazing (even if the action(s) in question were carried out by a single/small group of persons) the entire Greek organization could be facing academic probation, expulsion, loss of college/Fraternity House housing, financial aid, or other scholarships. This could affect your long-term security and ability to function in the “real world” by having a student honor code violation/disciplinary record.

But The “Hazed” Person Consented!

While these disciplinary charges can be detrimental, if criminal charges are filed, your future could tangibly be in jeopardy, too. Many don’t know that even if a “pledge” consents to the process, this can’t be used as a defense. This means the person who is hazed, even if they say “yes” fully, completely, and wholeheartedly, has their decision legally ignored. Years of tradition, teambuilding, and the new members’ own ability to say yes/no are completely ignored.

To make it even simpler, if someone consents to these acts, their saying “yes” can still result in criminal charges, college disciplinary charges, or civil charges being leveled against you.

For experienced criminal defense attorneys who will fight for you against your charge of hazing, contact the Strom Law Firm, LLC today for a free consultation to discuss your arrest, possible defenses, and whether you may be eligible to have your charged reduced or even dismissed.